For you non-italian speaking people who may be interested in knowing how is roller derby in Italy, well, this is the right place to find all the info you may need (anything missing? Drop a line to [email protected] and wel’ll gladly help you).

The oldest traces online of Roller Derby in Italy date back to February 2011: a blog post about this new, exciting sport with lots of people in the comments asking about existing teams, or for others to create ones with. It’s fun to read about a girl who wrote in August 2011 about her struggle to find people in Milan: six months later she will be one of the founders of Harpies, the current Milanese team.Somewhere between 2011 and 2012 the first italian team was founded: Naples Roller Derby, which was mostly made up of American girls from the military base. Later in 2012, teams in Milan, Bolzano and Palermo were also founded. Naples also witnessed the very first italian event, this article notes that skaters from Milan, Rome, Naples and Palermo were present. Unfortunately, the team in Naples did not last very long; they had disbanded by 2013 or so.

2013 saw more teams founded (Bergamo, Turin, Vicenza, Rome and a team located in the american military base of Sigonella, in Sicily) and the very first bootcamp, in Milan, with skaters from all over Italy. The bootcamp was hosted by a couple of italians who lived abroad and were already playing.

2014 was a fundamental year: more and more teams were founded (basically all italian teams were born between 2012 and 2014), the first bout in Italy took place (Milan vs Geneve) and the first National team was built up, allowing Italy to take part to the 2014 World Cup in Dallas. 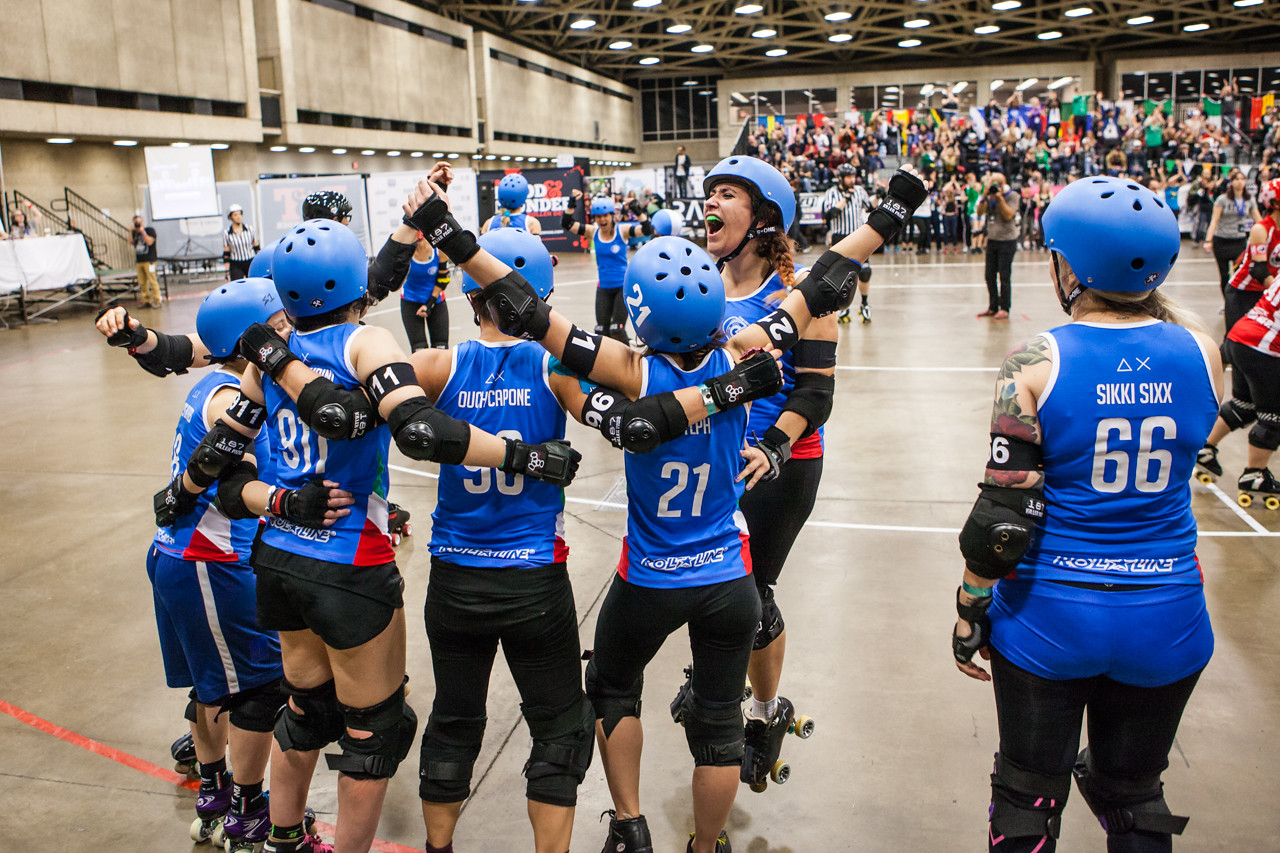 In 2016 the National men’s team was founded, made up of players from Italy, and the rest of Europe, debuting in the Men’s Roller Derby World Cup in Calgary that year.

Map of the italian teams
Stars indicate teams which are currently active, squares teams which have since disbanded.

As of today (2019) there is no official national championship; but there are a number of recurring events and tournaments which form the basis of our season.

The oldest recurring event is Scusa Mamma Ma Sono Una Derby Girl (“Sorry mama but I’m a derby girl”), hosted yearly by She Wolves in Rome, in memory of one of the founders of the team.

Since 2014, SKIR – Skate Im Ring, hosted in Collalbo (near Bolzano) by Alp ‘n Rockets, is the most important event for Italian Derby, since it’s a tournament entirely made of Italian teams.
It is the weekend in which all of the italian community of roller derby gathers, and the closest we have to an “italian championship”. The 2018 edition did not take place but it was replaced by BIT – Block In Turin, hosted by Bloody Wheels, with the same all-italian-teams tournament formula.

Up to 2017, the tournament was made up of six teams, with at least one interleague team (composed of skaters across multiple teams, none of which have enough skaters to field a complete roster individually). Since 2018, the number of teams involved is eight and the number of interleague teams is gradually reducing.

Harpies Milano and The Anguanas Vicenza are the teams usually competing for the first place.

Here is the complete list of recurring events in Italy.

Accolades and more
As of 2019, Harpies Milano and The Anguanas Vicenza are among the top 100 teams in Europe, according to Flat Track Stats.

Vicenza is the only italian league having a b-team.

The first overtime jam in Italy happened during the 2018 edition of the Scusa Mamma Tournament, between She Wolves Rome and Ingles De Acero Barcelona B. The game ended with the locals winning 212-211.

In order to raise awareness about the Italian sign language (LIS), which exists since years but hasn’t been recognised yet by the Italian parliament, both Team Italy and Men’s Team Italy sing and sign “Inno di Mameli”, the Italian national anthem (check it out here).

Final picture at the end of the 2016 edition of Skir